From the brink of time, people started to document their processes.

About 17,000 years ago, people in Lascaux (southern France) started recording their business processes (hunting and collecting). This was not the only place where this happened. Similar finds have been made all over the world. Later civilizations only started to do things differently. For example, the walls of temples in Egypt formed a basis for narrative in a different way with a writing form of Hieroglyphs. The “carrier” was sustainable because the temples are still there today.

In fact, if you analyze the definition of the term “document”, we speak of information on a content carrier. So both the Lascaux caves and the temples in Egypt are essentially documents. A man with a master’s degree in library and documentary science once explained: “An Elephant in the wild is a large animal. An Elephant in the zoo is a document”.

The need for a tangible format

Some 6000 years ago there was a guy in Mesopotamia that was a writer who embraced the technology of clay tablets to express his ideas to a tangible form. At a certain point in time, he looked at his pile of clay tablets and he came to the idea that it needed some order. It was getting harder and harder to find back that particular volume of content that he needed. Also, his mother came to his studio once in a while to find a recipe for another dish to put on the table at the end of a long day’s work.

Basically, the use of drawers or folders has not changed over time. Other civilizations started writing on papyrus, or goatskin and only a few hundred years ago people started to use paper. The Romans came up with the wax tablet so they had a reusable tool for scribbling. No Moppe for that purpose.

The IKEA case concept has proved to be sustainable too. The Trinity College library in Dublin is actually a giant “Moppe” and people find their way through that vast amount of knowledge via a card system.

Lascaux
15000 years ago, people started to document their processes of hunting and gathering
Temple walls
The walls are there, man made, why not use them to document.
Tangible documents
It's quite cumberson to get to the temple everytime you need a bedtime story
Order in storage
You'll need this when you have dozens of clay tablets
Scribbling and sketching
Not every document is for keeps
Permanent documents, just different shape or material
Too much documents for just one Moppe and these giant Moppes become status symbols.
Game changer
The lightbulb is on of off. 1or 0. Humanity has become binairy.
Commodity
A computer for everyone. Some of them on a desk. Other devices in your pocket. 24/7 all around the globe.
Previous
Next

Suddenly we got computerized

Since we store content in a binary shape on a disk (using computer memory) we are able to tag the files with values that enable retrieval. We are now able to store a file on two virtual shelves simultaneously.

In reality, we still create virtual Moppes and we can even create Moppes within Moppes, and within the Moppes in the Moppes. We hide our content so deep in the jungles of folders because we think that we can find them back easier.

But if you organize your own OneDrive (pleonasm because a OneDrive is personal) just do what you please as long as you don’t ask others to find their way in the representation of your perception. 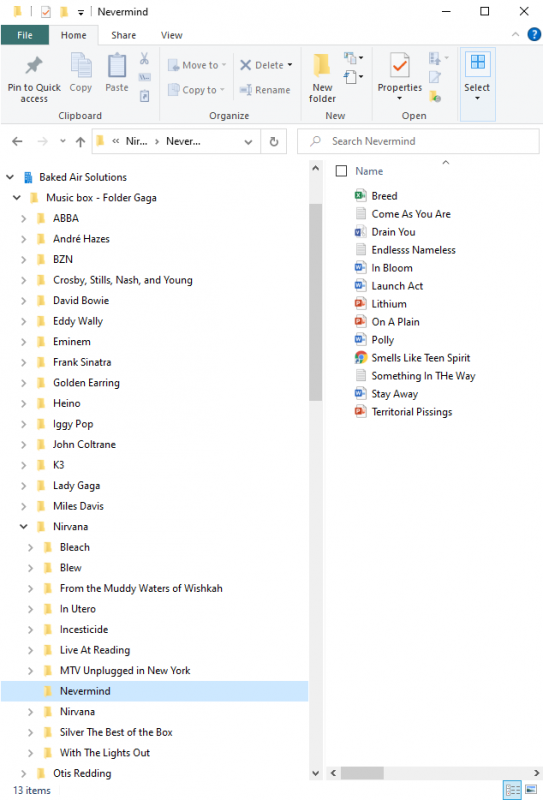 The effect of a folder-based structure.

Imagine you have a great volume of content items (files) that you want to store in a folder structure. A song is just a volume of information on a carrier. You first need to invent the hierarchy of the folder structure and, just for the sake of the example, you choose to order via a model of:

It often happens that a tune is used on multiple albums. In that case, are you gonna duplicate your file per album? Or, if you just want to find a special song, you need to know the artist and the album before you find the tune.

Until 5 years ago most people used iTunes or another media player. It had an interface that enabled you to find a file with “love” in the title, in a range of 40000 songs, based on tags. It took you only 3 or 4 clicks to find the love that you needed. 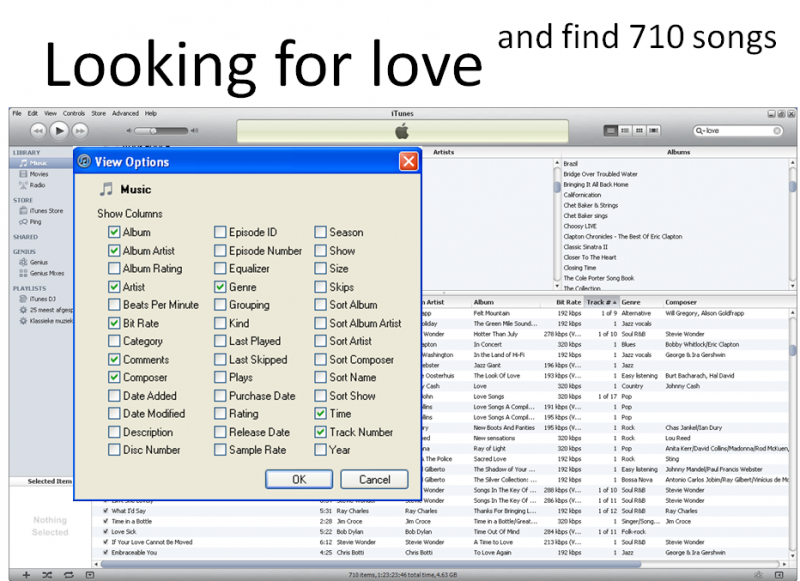 Spotify. A success story based on metadata.

Using iTunes, you were still able to browse through your repository; but nobody did. They embraced the added value of the search based user interface.

Spotify doesn’t even allow you to browse through the (folder based) repository. They present you 50.000.000 volumes of unstructured content (music files) and in only a few clicks you find what you need. It may be love, it may be something else.

They invested in their user interface and classification.

OK I agree if you say it’s only about consuming content. I don’t work for Spotify but if you can use this approach for retrieval of content, it might just as well be a solution for Creating, Updated, and Deleting content.

That is what we do in a medium like SharePoint we Create, Read, Update, Delete unstructured content. Some of it may be sensitive, other content may be of temporary value, other files need strict procedures and logging to provide proof but that is no reason to step away from folders

A SharePoint alternative based on tags!

Metadata is key in organizing content that is shared among people. A folder is also an approach to metadata but that is not what we are talking about here.

It’s not possible to bring SharePoint-based content to a public audience (anonymous). However, there are ways to bring M365 originating content to the outside world but that’s a different use case.

Imagine you have the same instruments for creating, retrieving, updating or deleting office-files (Word, Excel, PowerPoint, Pdf, txt, mp3 avi) on your landscape. Porviding all kinds of filters to drill down search results. Just like we do when we are using filters on columns in a spreadsheet. That we can create all kinds of pre defined views, that you can create your own views.

If we do that you will not be squeezed in the perception of the person that created the folder hierarchy.

I don’t have the time to add metadata, people say when they don’t embrace it right away. Often these people create a maximum of 10 files per week. Considering that tagging takes 30 seconds per file, this approach will deplete 300 seconds per week.

It doesn’t happen without a little extra attention but the process of classification can also be automated, but that’s another blog.

Bottom line. You’re not writing for yourself in a professional setting. You document because other people need the information so make it easy for them to find the info.